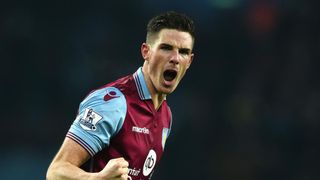 Aston Villa left it late to see off Wycombe Wanderers 2-0 and secure their place in the fourth round of the FA Cup.

After Joe Jacobson's penalty earned the League Two outfit a credible draw at Adams Park 10 days ago, Villa looked like they were heading for extra time in the replay as they struggled to break down their opponents, who had twice gone close through Garry Thompson.

Ciaran Clark came up with the goods for the Premier League side, however, as he headed in Ashley Westwood's cross 15 minutes from time, before a fine goal from Idrissa Gueye settled the contest to book a tie with Manchester City in the next round.

Nevertheless, Gareth Ainsworth's Wycombe can take plenty of positives from their return to Villa Park, 15 years after going down 2-1 to Liverpool in the semi-finals.

Villa were on top in the early stages as they looked to get the job done, but Wycombe goalkeeper Matt Ingram snuffed out the threat of Scott Sinclair in the fourth minute and Rudy Gestede - promoted to the starting XI after Saturday's Premier League point-saving goal against Leicester City - headed off target.

Having weathered the storm, Wycombe began to grow into the game and Sam Wood drew a fine save out of Brad Guzan after a quick throw-in had caught the Villa defence cold.

Sinclair's pace on the break remained menacing and the forward was in down the left as half-time approached, but Ingram reacted sharply to tip his effort into the side netting.

And the League Two side ought to have capitalised on that save in the dying seconds of the first half, but Thompson headed over with the goal at his mercy after Guzan had made a mess of Jacobson's left-wing cross.

Remi Garde's men had the first decent opportunity after the break. Jordan Ayew burst into the area and had Gestede screaming for the ball to be squared, but was unable to find his strike partner, much to the frustration of the home fans.

The hosts were nearly made to pay for their wastefulness as they survived a real scare from Thompson on the hour mark. Villa again failed to deal with Jacobson's initial cross before the left-back's follow-up delivery was once more nodded off target by Thompson.

Villa responded by turning up the pressure and Clark finally got the better of the stubborn fourth-tier side with a free header 15 minutes from time.

Substitute Gueye finally put the tie beyond Wycombe in the dying seconds when he slotted home a second goal after Gestede had cushioned Sinclair's cross neatly into his path.