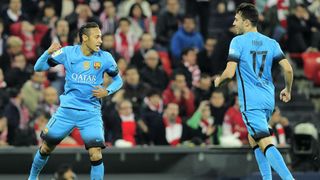 First-half goals from Munir El Haddadi and Neymar gave Barcelona a slender lead in their Copa del Rey quarter-final tie against an aggressive Athletic Bilbao with a 2-1 first-leg win at the San Mames.

Munir and Neymar, who attracted numerous fouls for his flamboyance, helped ensure the absences of Lionel Messi, rested after picking up a knock at the weekend, and the suspended Luis Suarez were not too sorely felt, but Aritz Aduriz scored late on to raise Athletic's hopes ahead of next week's return encounter.

Barca were 6-0 winners over Ernesto Valverde's side on Sunday and, despite being put on the back foot in the opening exchanges, opened the scoring when Munir slotted home from Ivan Rakitic's exquisite cross with 18 minutes played.

Midway through the half Neymar capitalised on goalkeeper Iago Herrerin's failure to claim a pass and Xabier Etxeita's slip to convert for the fifth successive match against Athletic with a simple finish.

Athletic grew frustrated as Luis Enrique's side tightened up after the break and Aduriz - banned for last weekend's clash - was fortunate to avoid a card after clearly dragging his foot across the back of Neymar after chopping down the Brazilian, who had just flicked the ball over his head.

The match soon began to resemble the fractious nature of the pair's encounter in last season's Copa del Rey final, before Aduriz gave the hosts a glimmer of hope by punishing Dani Alves' error to score in the 89th minute.

Athletic refused to give Barca time and space in possession early on, but Herrerin was forced into the first save, adjusting his feet well to turn Neymar's dipping, deflected effort behind in the 15th minute.

Luis Enrique's team were ahead just three minutes later when Arda Turan released Rakitic down the right and Munir slid home from the Croatian's brilliant cross.

Barca doubled their lead in the 24th minute when Neymar latched onto Sergi Roberto's throughball and made the most of sloppy defending to slot into a vacant net.

Tempers flared when Athletic felt aggrieved not to be awarded a penalty seven minutes before the interval when Aduriz fell under pressure from Javier Mascherano, but the referee did not consider there to be a foul.

The fiery nature of the game continued in the second half and Aduriz could have been dismissed for dragging his foot over Neymar's back, while Aymeric Laporte and Etxeita were shown yellow cards for rash challenges on Sergio Busquets and Aleix Vidal.

Chances were few and far between as cheap and reckless fouls dominated the match, but Athletic mounted a late surge.

After Marc-Andre ter Stegen made a great save from Sabin Merino's header, Aduriz pulled one back for the hosts when he fired inside the near post after Mikel San Jose had collected Dani Alves' weak clearance.

There was almost an equaliser in the final minute of normal time, but Ter Stegen reacted quickly to keep out Sabin's flick.