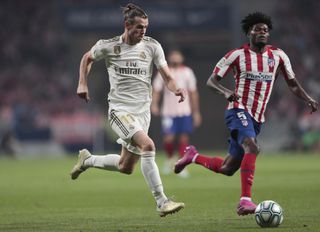 It was honours even in the first Madrid derby of the season as Atletico and Real played out a goalless draw at the Wanda Metropolitano.

Real edged things on possession and chances, with Jan Oblak making two strong saves, and the result keeps Zinedine Zidane’s side one point ahead of their city rivals at the top of LaLiga.

Teenager Joao Felix was a thorn in Real’s side throughout the time he was on the pitch, and he had his first sight of goal in the eighth minute, running onto a ball from Diego Costa but shooting wide.

Gareth Bale headed over the bar at the other end while Atletico midfielder Vitolo sent a chip just wide of the goal of Thibaut Courtois, who was given a ferocious reception as he faced former club Atletico.

The home side were more than matching their opponents and Thomas Partey’s excellent cross just evaded Costa, before the same player set up Felix for another shot off target.

Oblak had not been seriously tested in the Atletico goal but that changed in the 41st minute when Toni Kroos let fly from long range with a curling effort that was pushed away by the keeper at full stretch.

Kieran Trippier was again impressing as an attacking force for Atletico and his cross just before half-time again had Courtois scrambling and Costa lurking, but the keeper got there first.

Atletico made a change for the second half, Angel Correa replacing Vitolo, and the hosts continued to look dangerous.

However, Bale should have put Real ahead in the 57th minute but met Nacho’s cutback with a horribly skewed shot.

A flurry of substitutions led to a lull in the game, but Koke went close for Atletico in the 73rd minute with a header that dropped wide.

Two minutes later, Oblak made the save of the match, diving low to his left to keep out Karim Benzema’s powerful header.

Atletico appealed for a penalty when Correa clashed with Sergio Ramos but the referee was unmoved, and Koke was then off target with another effort, this time from Trippier’s cross.

Both sides attempted to find a winner but they had to settle for a point apiece.