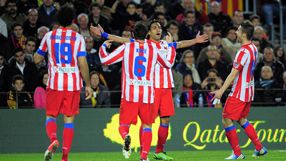 Colombia striker Falcao, coveted by several of Europe's richest clubs, nodded the opener in the 11th minute at the Calderon and Brazilian full-back Filipe Luis added a second 12 minutes later.

Betis had their chances and dominated possession for long periods in the second half but Atletico's Belgian goalkeeper Thibaut Courtois, on loan from Chelsea, was in inspired form.

"We knew that Betis were going to pressure us in the second half," Atletico captain Gabi said in a pitchside interview with television broadcaster Telecinco.

"But we played a great first half and we were able to hold on to the advantage and get a very good result," the midfielder added.

"I think it's still 50/50, we have to go to their stadium and they are playing very well but we will work hard to get through."

If Atletico can protect their lead in next week's second leg in Seville they would meet Sevilla, who beat them in the 2010 final, or Real Zaragoza in the last four.

New Sevilla coach Unai Emery, appointed this week to replace the sacked Michel, had a disappointing debut when the Andalusian club were held to a 0-0 draw at Zaragoza on Wednesday.

On the other side of the draw, holders Barcelona squandered a chance to all but seal a probable semi-final showdown with great rivals Real Madrid when they conceded a late goal to draw 2-2 at home to 10-man Malaga on Wednesday.

Real, the 2011 winners, have one foot in the last four after beating Valencia 2-0 at the Bernabeu on Tuesday.