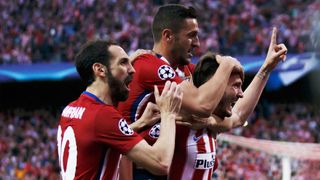 Saul Niguez scored one of the great Champions League goals to give Atletico Madrid a 1-0 semi-final lead over Bayern Munich after a pulsating first leg at the Vicente Calderon.

Outgoing Bayern coach Pep Guardiola declared before the match that his decorated spell in Bavaria will be defined by how this European campaign concludes following last-four losses to Real Madrid and Barcelona in the past two seasons.

And it could be another tale of misery against teams from his homeland for the Manchester City-bound tactician, who could only look on as Saul crowned his breakthrough season with a sensational solo goal in the 11th minute.

Bayern were second best as the tenacious brilliance of Diego Simeone's side held sway in the first half.

The visitors looked to mount a response after the break as David Alaba struck the crossbar from long range, while Fernando Torres was denied by a post as Atletico sought a greater cushion.

Real Madrid's 0-0 draw at Manchester City on Tuesday means a repeat of 2014's all-Madrid final is firmly on the cards.

Guardiola opted to leave Thomas Muller and Franck Ribery on the bench and Bayern began the match with wingers Douglas Costa and Kingsley Coman hugging their touchlines in an attempt to stretch Atletico's compact defensive set-up.

The plan did little to unsettle the hosts during the opening stages as Torres and Antoine Griezmann had shots blocked before Saul marked the occasion in truly great style.

The Spain Under-21 international eased away from Thiago Alcantara in midfield and skipped nimbly through a pair of challenges from Juan Bernat and Xabi Alonso.

That brought Saul into the penalty area, where a step over engineered space inside Alaba to curl a left-footed shot in off the base of Manuel Neuer's right-hand post.

Bayern nearly had an instant response, but centre-back Jose Gimenez atoned for a horribly sliced clearance by diverting Arturo Vidal's header to safety from under the Atletico crossbar.

Costa almost caught out home goalkeeper Jan Oblak by whipping a free-kick from the right into the side-netting, but Bayern were struggling against relentless opponents, who should have doubled their advantage before the half hour

Griezmann raced in behind the visitors' backline, but his control deserted him and Javi Martinez could apply pressure before the France star prodded a shot at Neuer's left boot.

Bayern drove Atletico deeper at the start of the second period, although it was a pattern of play with which the Liga side appeared comfortable.

They had a scare in the 54th minute when Alaba almost matched Saul in terms of inspirational excellence – the defender sauntering forward before sending a sumptuous 35-yard strike cannoning onto the frame of the goal.

Centre-back partner Martinez tested Oblak from a corner soon afterwards and Bayern striker Robert Lewandowski created space to lash across the face of goal in the 64th minute.

Guardiola summoned Ribery and Muller either side of Costa lifting Philipp Lahm's raking pass on to the roof of the net and Oblak pushed a trademark rasping drive from Vidal to safety.

Almost inevitably, Atletico sprung into action with one of their rapier counter-attacks – Griezmann feeding Torres to shoot against the post with the outside of his right boot.

It was another reminder to Guardiola of the stern task awaiting his side at the Allianz Arena next week.

- Atletico Madrid have won 13 of their 17 Champions League games at the Vicente Calderon under Diego Simeone (D3 L1).

- Bayern Munich are winless in their last eight away games in the Champions League knockout stages (D4 L4).

- Atletico have kept a clean sheet in 14 of their last 16 Champions League matches at the Calderon.

- Saul has scored nine goals in all competitions this season, more than any other Atletico midfielder.

- The two highest possession figures for a losing side in the Champions League this season have come in matches against Atletico (Barcelona 77 per cent and Bayern 74 per cent).