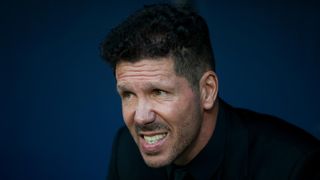 Atletico Madrid had to settle for a fifth draw in six competitive matches as they were held 1-1 by Villarreal at the Wanda Metropoliatno on Saturday.

Held to a 1-1 draw at third-tier Elche in the Copa del Rey on Wednesday, the Rojiblancos were made to wait for the opener as Villarreal set about proving their pedigree as contenders for a Champions League spot.

Unsurprisingly it was a flash of brilliance from Antoine Griezmann that gave the home side the lead in the 61st minute as his exquisite vision and touch enabled Correa to tuck home at the near post.

But, having spurned chances to go ahead in the first half, Villarreal continued to create opportunities and found late reward through Bacca.

Bacca was first to try his luck during a subdued opening and should have done better in shooting straight at Jan Oblak.

Atleti warmed to the contest as the half wore on, Correa drawing a sharp low save from Mariano Barbosa before Kevin Gameiro and Antoine Griezmann both failed to hit the target from the edge of the area.

Cedric Bakambu, scorer of six goals in his previous three league appearances, looked destined to continue his fine form when he was put through by Manu Trigueros, but the striker dallied over his finish and enabled Stefan Savic to produce a superb sliding challenge.

The visitors narrowly avoided paying an immediate price for the missed opportunity as goalkeeper Barbosa scampered to his far post to divert a goal-bound Griezmann volley, with Saul Niguez's tame follow-up cleared off the line by Victor Ruiz.

And it was Barbosa who again preserved the deadlock on the stroke of half-time, the 33-year-old athletically tipping Diego Godin's header over the bar.

Spain Under-21 international Rodri issued a reminder of the danger at the other end by forcing Oblak to parry a low effort shortly after the restart.

Griezmann's genius eventually shone through for the home side, though, as his first-time flick out to the right found an unmarked Correa, who applied a fitting finish inside the near post.

Simeone's side came close to doubling their advantage soon after as the ball dropped kindly for Gameiro, only for an onrushing Barbosa to smother the chance at close-range.

The hosts' inability to extend their lead proved costly as Bacca rose high and headed in Samu Castillejo's corner to seal a hard-earned point for Calleja's side.