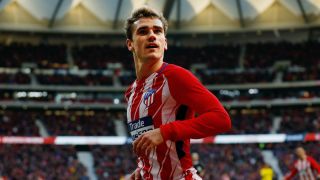 Antoine Griezmann and Fernando Torres were on the scoresheet as Atletico Madrid got back to winning ways and cut the gap to LaLiga leaders Barcelona to eight points with a 3-0 victory over Las Palmas.

Atletico had failed to win any of their last three games, being held by Girona and losing in both legs of their Copa del Rey tie with Sevilla, and they were unconvincing for long periods against their struggling visitors with striker Diego Costa again out of the squad.

Parity at half-time was justified for Paco Jemez's side despite Griezmann hitting the bar for Atletico, but Diego Simeone's men stepped up a gear in the second half.

Griezmann made it 1-0 in the 61st minute as Las Palmas were caught on the counter, and they were failed to learn their lesson from that goal.

A stray pass allowed Atletico to again break quickly, and the move was wonderfully finished off by Torres for only his second league goal of the campaign and the 600th Atleti goal under Simeone in all competitions.

Thomas Partey added late gloss to the scoreline but, while triumph narrows what should be a decisive lead for Barca, the leaders will be expected to stretch it back to 11 when they take on Deportivo Alaves later on Sunday.

7 - Antoine Griezmann has scored more goals at Wanda Metropolitano than any other player (seven – all competitions). Prince. January 28, 2018

Koke wasted an early opening for Atletico as he burst into space and towards the area, only to toe-poke the ball well over the crossbar.

And the hosts would have fallen behind if not for a surprisingly adept piece of defending from Angel Correa, who tracked back and robbed the ball from Jairo as he shaped to shoot after an excellent cross from the right from Hernan Toledo on the counter.

At the other end Leandro Chichizola was alert to deny Gabi after he was played in by Torres, who then sprung the offside trap only to flash an effort wide.

Griezmann went closest to breaking the deadlock and would have done so in spectacular fashion had his audacious heeled effort, which saw him wrap his right leg behind his left to meet Juanfran's right-wing cross, not clattered the crossbar.

Jairo offered a reminder of Las Palmas' threat with a decent long-range strike wide of the left-hand post, but the visitors owed Alejandro Galvez for preventing Torres from opening the scoring after the break with a vital challenge after more good work from Juanfran.

But Las Palmas could do nothing to prevent Griezmann from finally opening the scoring as he latched on to a perfectly placed throughball from Juanfran, finishing confidently as he lofted the ball over Chichizola.

Yannick Carrasco saw a curling shot deflected wide and, though a goal-kick was incorrectly given, Griezmann was afforded a golden opportunity to make it 2-0 as he chipped Chichizola after Las Palmas carelessly conceded possession, only to be denied by the woodwork once more.

However, there was no reprieve for further sloppy play in possession from Las Palmas as Torres rolled back the years by brilliantly rifling into the roof of the net, substitute Thomas then rolling into an empty net after the visiting defence parted for a final time.