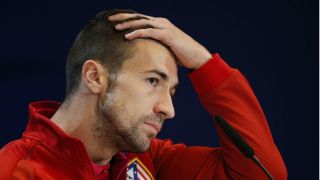 Gabi says Atletico Madrid can match their stellar LaLiga rivals after going down swinging in the Champions League semi-finals to Real Madrid.

Goals from Saul Niguez and Antoine Griezmann had Atleti, and a raucous Vicente Calderon, dreaming of a remarkable second-leg comeback from 3-0 down, but Isco's goal three minutes before half-time stymied the contest.

Diego Simeone's men have had four successive Champions League campaigns ended by defeats to their near neighbours, while Atleti have failed to match Los Blancos and Barcelona in LaLiga this season, and sit 10 points adrift of the title race.

Having seen his side become major players in the continental game, Gabi now wants that to reflect in their domestic efforts.

Of Atletico's stirring performance from the first whistle, the captain told beIN Sports: "It was the minimum the fans asked for and what we had to do.

"The first half was amazing but a piece of magic from [Karim] Benzema took our dream a little away from us. We didn't give up; I'm proud of this team.

"We've never stopped believing. Beyond this tie, it helps us to build positive things. We have to work from today to become equal to Real Madrid and Barcelona."

He added of the ear-splitting din in the Calderon's final European game: "The triumph is always in winning but this has rarely been seen in football. It's the ultimate demonstration of the best fans in the world.

"From the start of the match, we showed that it was possible. We're proud of our fans."