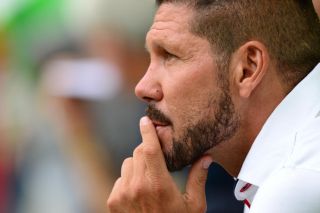 Diego Simeone's side sprung a real surprise in 2013-14 as they held off their richer, more illustrious rivals to lift Spain's top-flight title for a 10th time.

Atletico's blend of exciting, attractive football, coupled with an undeniable underdog status, helped win admirers around the world as they took advantage of an under-par Barca side and a Real team seemingly more focused on European glory.

However, Simeone has arguably a tougher test on his hands in 2014-15, not least due to a host of key departures.

Diego Costa and Filipe Luis have both moved to Chelsea, where they will feature alongside former Atleti loan star Thibaut Courtois, while David Villa has left for New York City in the MLS.

While Simeone has acted swiftly to replace such departures with the likes of Mario Mandzukic and Antoine Griezmann, the club's close-season recruitment was dwarfed by the scale of arrivals at the Santiago Bernabeu and Camp Nou.

Carlo Ancelotti's Real will be eager to present a stronger challenge in La Liga after seeing their gaze diverted by La Decima last term. Luis Enrique will be tasked with helping return the title to Catalonia.

Not since Athletic Bilbao in the early 1980s has a team other than Barca or Real lifted the title two seasons running - a record Ancelotti and Luis Enrique will be eager to maintain.

Ahead of their opener against new boys Cordoba this weekend, Ancelotti has added significant strength to a squad that fell just short of the treble last season, although Barca's fortunes remain far from clear going into Sunday's visit of Elche.

Boosted by Xavi's decision to stay and the popular appointment of former great Luis Enrique, the 22-time champions have been the subject of criticism for some underwhelming business in the transfer market and will be without Suarez early in the campaign due to his ban for biting at the World Cup.

It sets up what promises to be a fascinating title race in a league campaign that will also see Eibar make their La Liga bow.

Having raised sufficient funds to secure a place in the top flight, the relatively small club from the Basque Country begin their campaign against Real Sociedad. Former champions Deportivo La Coruna travel to Granada.

Valencia, another club to briefly threaten Barca and Real's dominance, will likely have new billionaire owner Peter Lim at the helm when they take on UEFA Europa League holders Sevilla - themselves buoyed by a host of new arrivals including Barcelona pair Gerard Deulofeu and Denis Suarez.