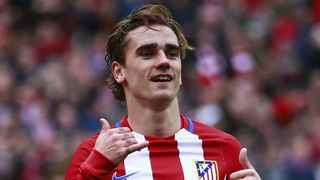 Atletico Madrid forward Antoine Griezmann believes there is a 60 per cent chance he will play for Manchester United next season and expects his future to be resolved within the next two weeks.

Griezmann has enjoyed another superb season with Atleti, scoring 26 times across all competitions for the LaLiga outfit.

United broke the world transfer record with their initial outlay of £89.3million to bring back Paul Pogba from Juventus last year and are reportedly readying another blockbusting bid to sign the midfielder's France international team-mate.

When asked to rate the chances of him ending up at Old Trafford out of 10, he replied: "Six."

Griezmann, who ended up on the losing side with club and country in the finals of the Champions League and Euro 2016 last season, also discussed his prospects of winning the Ballon d'Or – noting it will be tough to win the coveted gong while Lionel Messi and Cristiano Ronaldo are still around.

"The Ballon d'Or? I don't know," he said. "If Cristiano and Messi continue to play football, it's going to be complicated."

Defending champions Real Madrid reached the Champions League final at Atleti's expense to face Juventus this time around and Griezmann added: "Even this year, [winning the Ballon d'Or] will be very complicated with what Ronaldo and [Juventus goalkeeper Gianluigi] Buffon have already won."