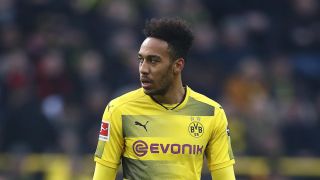 Pierre-Emerick Aubameyang struggled to make an impact on his return to the Borussia Dortmund side as Arsenal continue to thrash out a deal for the striker.

Aubameyang had missed Dortmund's last two Bundesliga games - one in case of a lack of focus due to the Arsenal links and the other because of a disciplinary issue - but was recalled by coach Peter Stoger for Saturday's visit of Freiburg.

The Gabon international toiled, though, and was jeered throughout by Dortmund fans, recording a single shot - a header sent over the crossbar - and only one touch in the opposition box.

A late Jeremy Toljan goal salvaged a 2-2 draw for Dortmund, who are now 19 points behind leaders Bayern Munich, but a seemingly disinterested Aubameyang looked every inch a player on his way out of the club.

Sporting director Michael Zorc insisted pre-match that Aubameyang would only be allowed to leave if Dortmund received an acceptable offer, although he confirmed Arsenal have made "several" approaches.

"No player is bigger than the club," read a banner shown by supporters at Signal Iduna Park and Aubameyang's anonymous performance may prove to be his last for Dortmund, with the transfer window set to close on Wednesday.