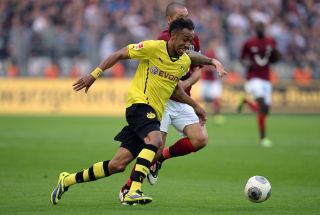 Dortmund could only manage a 1-0 win over Hannover in the Bundesliga on Saturday with Marco Reus scoring the only goal of the game, converting from the penalty spot in the fourth minute.

Aubameyang claimed some Dortmund players were 'already tired going into the game' against Hannover, due to their involvement with international teams the week prior, but is confident Jurgen Klopp's men will be ready for their UEFA Champions League trip to London on Tuesday.

"We'll have further recovered by then and we'll be in better form," Aubameyang told the Bundesliga's website.

"Having a big game in the Champions League should give us extra motivation."

Dortmund took 18 shots against Hannover with eight of those efforts testing the visiting goalkeeper Ron-Robert Zieler.

Hannover managed 10 shots with five on target and Aubameyang claimed fatigue was the reason he and his Dortmund team-mates were unable to win by more against the seventh team on the Bundesliga table.

"I had the impression some of us were already tired going into the game and it got worse as the match proceeded," the Gabonese striker said.

"We didn't have our usual rhythm and didn't play the high tempo football we normally do.

"But a second goal would've killed the game."

The English Premier League club have scored four goals and conceded just one in their wins over Marseille and Napoli, while they smashed Norwich 4-1 on Saturday.

Aubameyang knows Arsenal will be a tough test but has argued it is not all about stopping German playmaker Mesut Ozil at the Emirates.

"Ozil is in great form and is crucial to Arsenal's game but they're a quality side anyway," Aubameyang said.

"Olivier Giroud, for example, is also a very good player, I know him well from my time in France, he's a dangerous striker.

"Playing Arsenal won't be easy at all and we'll have to do better than we did on Saturday."