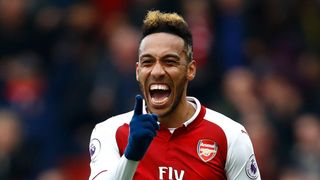 Pierre-Emerick Aubameyang scored a 10-minute hat-trick as Unai Emery started his Arsenal reign with an 8-0 friendly win over National League side Boreham Wood.

Emery was appointed Gunners manager in May after Arsene Wenger's 22-year spell in charge came to an end and the Spaniard could not have wished for a more comfortable first game in charge.

It was Wenger's last signing as Arsenal boss who was the star turn during a goal-laden first half on Saturday.

Aubameyang, who arrived from Borussia Dortmund during the January transfer window, plundered 10 goals in 13 Premier League games towards the end of 2017-18 campaign and wasted little time picking up where he left off.

His first came after seven minutes, whipping a shot into the top corner from outside the area, and he headed in a second at the back post just two minutes later.

He completed his hat-trick in the 17th minute, lashing home from the penalty spot after Reiss Nelson had been hauled down in the area.

Nelson then added a fourth with a fine volley 10 minutes before the break.

Emery changed all 11 players at the break, but it did little to disrupt the flow as Eddie Nketiah clipped home from close range eight minutes after the restart.

Jeff Reine-Adelaide and Henrikh Mkhitaryan then added two more in the closing stages as Arsenal started the Emery era with a resounding victory.