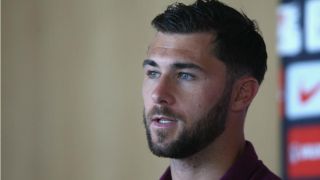 Charlie Austin is aiming to establish himself as a Premier League player after joining Southampton from QPR.

The striker hit 18 goals for QPR last season but that was not enough to save the west London club from relegation to the Championship.

Austin had 10 goals from 16 games in an injury-affected first half of the season for QPR and is now determined to prove his worth at the highest level yet again.

"I think it's important as a centre forward to be established in any league you play - and to play in the Premier League is massive," Austin told Southampton's YouTube channel.

"I had one season and then went back to the Championship, but now it's important for me to establish myself in the Premier League.

"I got 18 goals during my first season and I just want to push on from that now.

"People always ask if a player can make the grade. I feel like I've set my standard now with that year at QPR.

"Now I just need to bring that to Southampton and take it to the next level.

"I think any professional would [thrive under the pressure], because they know what they've reached before and they want to get back to those heights.

"I don't really set any targets. I just try to score as many times as I can every time I step across the white line."