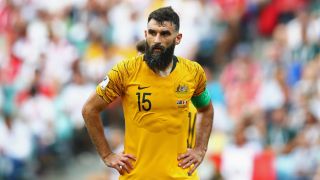 Veteran midfielder Mile Jedinak has retired from international football three months on from captaining Australia at a World Cup for the second time.

The Aston Villa man won 79 caps and scored 20 goals during a decade-long stint with the Socceroos.

He notably skippered the side to glory at the Asian Cup in 2015 and played a key part in qualifying the team for Russia 2018, where the 34-year-old notched twice from the penalty spot.