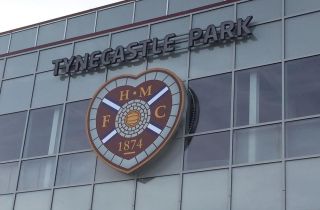 Donis Avdijaj admits he has had a “crazy career” so far but the Hearts newcomer is confident he will bring his goalscoring ability to Scotland.

The 23-year-old has already played in the top flights of Germany, Austria, Holland and Turkey and represented his native Germany at youth level and Kosovo as a full international.

The former Schalke winger signed a six-month contract at Hearts on Monday after being attracted to the club by Daniel Stendel when he decided to cut his ties with Trabzonspor.

The versatile forward had only been in Turkey for six months of a well-travelled life in football. Avdijaj was a prolific goalscorer in his youth career and was given a £41million release clause in his contract after being linked with Liverpool.

He helped Sturm Graz reach the Champions League qualifiers during a loan spell, played in the Bundesliga and had a fruitful loan spell at Roda JC. He then endured an unhappy time at Willem II after leaving Schalke before his brief spell in Turkey.

“I can say I have had a crazy career until now, but I can say I have learned a lot, I know a lot of mentalities and there is no country, no city in the world where I don’t score,” said Avdijaj.

“I score everywhere and also here. I hope I can show this to the people.

“I have had ups and downs but I will do everything to make sure Hearts is one of the ups.

“Since I was 16, every year in the newspapers I have read good and bad things about me. But I cannot choose what other people write. I only know what my decision is and where I want to go, and this is the only one that counts.

“I just care what my team and my club and the people next to me think about me, and not what people who don’t know me say about me.”

Avdijaj joins a club who are five points adrift at the bottom of the Ladbrokes Premiership ahead of Wednesday’s game against Ross County in Dingwall.

But working with Stendel proved the key to his decision to move to Edinburgh.

“We had a lot of talks with a lot of clubs and also the coach, Daniel,” he said. “For me it was important to come to a place where I can be myself, where I can play my football, where I can have a family behind me, and I think all in all, it was clear my next step should be to come here and play with this coach.

“The point I decided to come to Hearts was the coach. It was important I had a coach who knew who I was, what my strengths are, and a person who is a mentor behind me. He has all in one.

“We haven’t worked with each other but we have known each other for 10 years.

“And the club have great fans and, from what I have seen, lovely people. The fans here are emotional, they love football and this is special.”