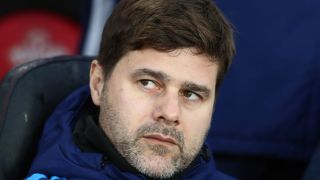 Tottenham manager Mauricio Pochettino believes his team's poor away record against top sides is all that is standing between them and the Premier League title.

Since Pochettino took over in May 2014, Spurs have won just one away league game in 18 attempts against fellow 'big six' clubs, that victory coming over Manchester City in February 2016.

Despite that record, Tottenham finished third in 2015-16 and second last season.

Ahead of a trip to Liverpool Sunday, Pochettino – whose side sit fifth this campaign – believes the away trips have been costly.

"That is why maybe we miss a title, why we don't win the Premier League," the Argentinian said.

"We finished second last season, third the season before, and of course if in the case we win more games away from home, I'm sure that we would win the title but we miss something to achieve that.

"Maybe it is because we are the younger team in the Premier League, maybe we need time to mature. There are many reasons why this happens that we cannot win most of the games that we play away from home."

Spurs also have a poor record at Liverpool, who have lost just one of their 23 Premier League home games against Tottenham (15 wins, seven draws).

Pochettino believes his team should not be compared to fellow English heavyweights.

"For me, it is not fair to compare Tottenham with Liverpool, Chelsea, Arsenal, [Manchester] United and City," he said.

"There are no similarities – it's just in the last seasons we finished second and third and they finished below us."