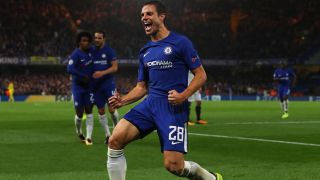 Cesar Azpilicueta is one of the best central defenders in the world, according to Chelsea head coach Antonio Conte.

The Spain international has become a crucial part of Conte's back three, and even got on the scoresheet in a 6-0 Champions League thrashing of Qarabag on Tuesday.

Azpilicueta, 28, played every minute of his side's successful Premier League campaign last season and has been a regular since joining Chelsea from Marseille in 2012.

Conte was full of praise for the defender after his side's latest win, saying Azpilicueta deserved to be considered among the world's best.

"Last season Azpi was one of the most important players for us," the Italian said.

"In this position as a central defender he is one of the best in the world. He is very good with and without the ball.

"He's a fantastic guy, he's always positive, and during the training sessions he works in a fantastic way.

"For a coach to have him is a dream."

Chelsea have won three of their opening four Premier League games and host Arsenal on Sunday.