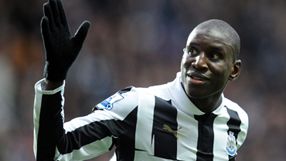 Chelsea are desperate for backup in attack for inconsistent Spain international Fernando Torres, who is the London team's most used outfield player this season.

"It's done, he will go to Chelsea with our blessing. He has done fantastically for us, it's a big club, good luck to him," Pardew told Sky Sports News ahead of Newcastle's clash with Everton on Wednesday.

"For us, it's not a bad thing because of all the uncertainty of whether he was going to stay is now done. We can move on, we're a massive club here. This club is bigger than any player for sure. In some respects, I'm pleased."

Newcastle earlier confirmed Chelsea's interest in Ba which "triggered the release clause in the player's contract," read a statement on their website.

Newcastle, labouring in the bottom half of the table after finishing fifth last term, did not give details of the release clause but media reports suggest it is around seven million pounds.

Chelsea made no official statement with Ba expected to undergo a medical and agree personal terms. The 27-year-old failed a medical at Stoke City in 2011.

Ba has been a mainstay in attack for the north-east club since joining from West Ham United on a free transfer in June 2011.

"We prepared yesterday with Demba in the side. I was assuming that. I was in the dark as I have been on most of this particular deal because obviously the ball was in Demba's court," added Pardew.

The striker, who previously had spells with Rouen, Mouscron and Hoffenheim, needed eight games to score his first Newcastle goal but he ended his drought in style with a hat-trick in a 3-1 victory over Blackburn Rovers.

Ba finished the 2011/12 campaign as the club's top league scorer with 16 goals including another hat-trick against Stoke.

He has continued his free-scoring ways this season, bagging 13 league goals to lie joint second in the overall chart behind Manchester United's Robin van Persie (16).

Options up front for Chelsea have been limited following the exits of Didier Drogba and Salomon Kalou in the close season and the decision to allow Romelu Lukaku to join Premier League rivals West Bromwich Albion on loan.

The move may also dampen speculation that Chelsea are trying to sign Atletico Madrid's Colombia striker Radamel Falcao, who has scored 17 goals so far in La Liga to take his side to second behind free-scoring Barcelona.

Newcastle seem poised to use some of the Ba money to recruit Lille and France defender Mathieu Debuchy, who was spotted in the stands watching the side on Wednesday.