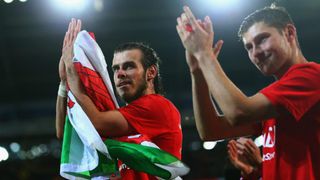 Bale left Tottenham in 2013 and has gone on to win the Champions League, Club World Cup, Super Cup and Copa del Rey with Madrid.

The Wales international has also scored 50 goals for the Spanish capital club after netting a hat-trick in Saturday's 5-0 La Liga demolition of Deportivo La Coruna.

International team-mate Davies has been keeping a close eye on Bale and feels the 26-year-old's rise to stardom can have an effect on Tottenham.

"Gareth's success is an inspiration to me. To see someone like Gareth, to see how well he did at Spurs, it helps massively when you're making a decision to move from Swansea to Spurs," Davies told The Mirror ahead of Sunday's FA Cup showdown against Leicester.

"When we play together for Wales, he always speaks well of this club. I always look out for him – although I also look out for any other Welsh player.

"He's one of the best players in the world, for me. He could play in any team in any country. If he came back to the Premier League, it would be a great thing for this league.

"But, right now, he's doing well out in Spain and I think somebody would do pretty well to get him away from there."

Davies, whose Tottenham are bidding to win their first trophy since lifting the League Cup in 2007-08, added: "The league is not necessarily more important than the FA Cup.

"The FA Cup is a great opportunity for us to pick up a trophy. It's the tournament that everybody wants to be able to say they've won in their career. I'm no different.

"It would be unbelievable to get to the final. It would be huge to win it – a great feeling for the club and the players."