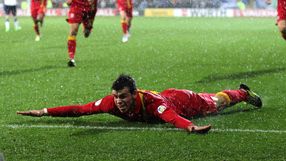 Scotland midfielder James Morrison coolly slotted in the opener after 27 minutes of the Group A qualifying clash after early exchanges characterised by some highly robust challenges from the British rivals.

Forward Steven Fletcher, returning after a long hiatus following a row with the national team management, had a header ruled out after the break for the visitors before Bale struck when he won and converted a spot-kick in the pouring rain.

The Tottenham Hotspur winger then showed he was a class above everyone else when he picked up the ball from a free-kick, ambled forward and sent a 25-metre rocket into the far corner.

The win gave Wales their first points of the campaign after three games as they seek a first World Cup appearance since 1958 while the Scots were left on two points after a rematch of the 1985 qualifier where their great manager Jock Stein died.