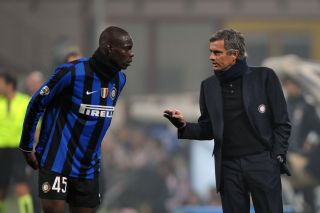 The Italy international previously played under Mourinho at Inter, with both men subsequently departing the club in 2010 as Mourinho moved to La Liga giants Real Madrid and Balotelli signed for Premier League Manchester City.

Balotelli has since returned to Serie A with Milan, while Mourinho began his second second stint in charge at Stamford Bridge in June.

The pair reportedly had several fall-outs during their time at Inter, with Mourinho once branding the striker "unmanageable".

But the player's agent, Mino Raiola, insists that their differences have been resolved and that Balotelli is in contact with his former coach.

"Balotelli and Mourinho could be reunited because they know each other and they didn't leave each other with hate," he told 'Tiki Taka' on Italia 1.

"There was not a very nice incident between them, but they parted company on good terms.

"They have remained in contact and there is mutual respect.

"It could happen (a move to Chelsea) but (Milan vice-president) Adriano Galliani obviously doesn't want it to."