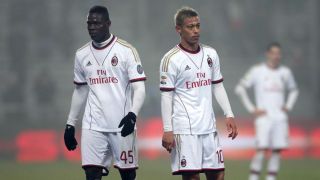 AC Milan pair Mario Balotelli and Keisuke Honda both appear to be doubts for Sunday's Serie A clash with Napoli.

Striker Balotelli has a groin muscle strain while attacking midfielder Honda is struggling with the flu.

Neither player trained with the team on Thursday, with Balotelli likely o continue working individually on Friday.

A statement on Milan's official website read: "For Keisuke Honda, the Japanese midfielder didn't train with his team-mates after coming down with the flu.

"Mario Balotelli was also in the gym on Thursday and worked apart from the rest of the squad.

"On Friday, it will be decided whether the forward will continue to work in the gym, which is looking likely, or whether to join up with the rest of the squad."

Milan are level on nine points with Napoli in the Serie A heading into the game at San Siro.