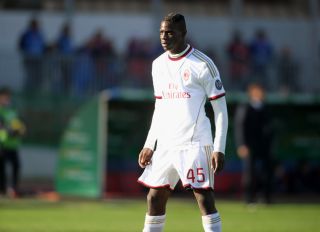 Milan are ninth in Serie A with 28 points in 21 games, half the tally runaway leaders Juventus have tallied up in the same time.

And despite Milan being well out of contention to add to their 18 Serie A titles, Balotelli said his switch from Manchester City back to his homeland was a fruitful one.

"I am happy to play for this great team, especially in difficult moments, because anyone can get through easy times. It's in the difficult ones that it's tough to get the best out of yourself," Balotelli told the Milan Channel.

"Now we find ourselves in a better situation compared to a while ago, as we are slowly pulling ourselves out.

"I am truly happy to be here, had a wonderful year with the Rossoneri and hope to continue like this."

Balotelli hailed Seedorf's early influence at the club, while also reassessing Milan's goals for the season, with hopes of domestic success now all but extinguished.

"Seedorf is great. He's a good person, above all knows how to connect with the players, perhaps because he was a player until very recently," the Italy international said.

"He is so eager to do well and to entertain. We all see things the same way as Seedorf that is why we all get along very well.

"What do I want from this season? I hope we can reach a Serie A position that will allow us to play in Europe and above all to beat Atletico Madrid in the Champions League."

And Balotelli said he bears the burden of responsibility to try and fire his team into Europe.

"I am important the same way that my other team-mates are, whether they are on the field, on the bench or in the stands," he said.

"It is only normal that being a striker I have more of an opportunity to push the team forward with goals, so I have a little more responsibility. I am happy to be a leader for this team."