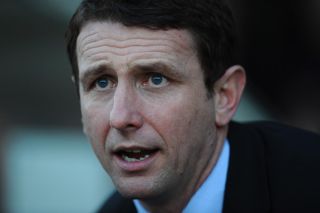 The Scottish Premiership side have been searching for a new manager since Stuart McCall resigned from his post last month after a poor start to the season that saw the club take just seven points from 12 matches.

Motherwell have now turned their attention to 44-year-old Baraclough, who will attempt to guide the club away from the danger zone in Scotland's top flight.

"I am delighted and find myself in a privileged position," Baraclough told the club's official website.

"It will be a hard task to take over from Stuart but one I'm very excited to take up.

"Short term my aim is to keep this club in the Premiership. There is no easy way to go about that and it is a situation that hasn't been at this football club in a few years but it doesn't scare me.

"I feel as though there is more than enough to push us up the table in the short term then try and build for long term by producing players.

"I am big on development, so the young players will certainly have a pathway to the first team if they are good enough.

"I want to win trophies. Why not Motherwell? Why can't we win the Premiership? You've got to go out with that thinking otherwise you won't achieve anything.

"To have days out in the cup are great for fans, but they are important. It's a way into Europe and I've been used to that and want more of it, as I'm sure the fans do too."

Baraclough started his managerial career at Scunthorpe in September 2010, but he was dismissed in March of the following year after a disappointing spell.

However, he took over at Sligo Rovers in February 2012 and led the club to the League of Ireland championship and 2013 FAI Cup before resigning in June this year.