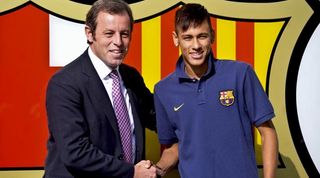 The action relates to the alleged misappropriation of funds during the signing of Neymar in the close-season, which saw just €17.1 million of the reported overall €57.1m transfer fee going to the Brazilian's former club Santos.

Barcelona club member Jordi Cases filed a complaint seeking confirmation of what happened to the remaining monies and, on Friday, the state prosecutor requested that the judge overseeing the case open proceedings against Rosell.

However, Barca have already defended Rosell's actions and have now demanded that any attempts to besmirch the club's name be immediately halted.

A statement read: "FC Barcelona have today formally presented to Central Court number 5 in Madrid, a legal affidavit demanding the action presented by a club member referring to the transfer of Neymar da Silva Santos Junior be thrown out of court.

"The affidavit presented asks for the lawsuit to be dismissed as there is no illegal action in the events originally described in it.

"The club provides a detailed argument as to why the lawsuit should be dismissed: Firstly because of the real motivation of the plaintiff, which is to use the legal system to attempt to discredit the Club and its President.

"Secondly, the affidavit explains that the payment of 40 million Euros to N&N Consultoria Esportiva and Empresarial Ltd as part of the payment for the player is included in the €57.1 million total, which the club has indicated from the first moment.

"Thirdly, the club refutes the arguments of the Finance Ministry of January 10, 2014, because on the one hand no contract simulation or mutation existed between the agreements made between the player and the N&N company in November 2011 and that signed on June 3 2014 in order to definitely sign the player for the Club.

"On the other hand, the amounts involved in the signing of the player are clearly reflected in the audited annual accounts of 2011-12 and 2012-13.

"Finally, the Club’s affidavit asks for the action to be thrown out, as it is not pertinent, necessary or corresponding to the appropriate procedural occasion."