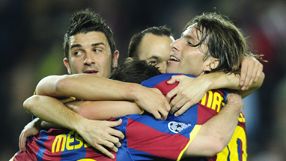 Andres Iniesta and his Barcelona team-mates are not letting themselves be distracted by the "Clasico" against arch-rivals Real Madrid at the Nou Camp at the end of the month and instead are focusing on Saturday's game at struggling Almeria.

"The three points (in Almeria) are worth just as much as those from the Madrid game," Spain midfielder Iniesta said on Barca's website.

"I don't think it will be difficult to put the Clasico out of our minds," he added. "We all have it marked in the calendar but our obligation is to think about Almeria."

Unbeaten leaders Real have a one-point advantage over champions Barca after 11 matches and host eighth-placed Athletic Bilbao at the Bernabeu in Saturday's late kick-off.

Real have beaten Bilbao on the Basque club's last five visits to the capital, including a 5-1 drubbing last season.

Barca coach Pep Guardiola will be without Eric Abidal for the trip to Andalusia after the France left-back suffered a small tear to a muscle in his right leg and club doctors advised four or five days' treatment.

"It's a very small thing but we don't want to risk losing him," Guardiola told a news conference on Friday.

Centre-back Gerard Pique, who felt a twinge in his hamstring during Spain's 4-0 defeat in Portugal on Wednesday, trained normally on Friday and Guardiola said a decision would be made on his fitness on Saturday.

Bilbao's Spain striker Fernando Llorente, who has scored eight goals this season and is third on the scoring chart behind Cristiano Ronaldo (11) and Lionel Messi (10), will be their danger man on Saturday, according to Real defender Marcelo.

"He is a very hard player to stop," the Brazilian said on Real's website. "But Real's defence is very strong and we are doing very good work."

Real coach Jose Mourinho will have to watch the game from the stands as he completes a two-match ban following his dismissal from the bench for verbally abusing the referee in a King's Cup match last week.

The Portuguese also faces the possibility of a further punishment from the Spanish football federation over last week's row with his Sporting Gijon counterpart Manuel Preciado.

"As far as I am concerned, it's not only closed but I have also asked the dressing room that it remains closed because it has also affected them (the players)," he said.

Atletico Madrid forward Sergio Aguero has shaken off a thigh problem and should be available for Sunday's match at promoted Real Sociedad, Atletico said on their website.

The Argentina international was forced off in last weekend's 3-0 home win over Osasuna that lifted the Europa League champions to seventh.

Atletico's Portuguese winger Simao, one of the club captains, would consider extending his contract by two years after it expires at the end of this season.

"In principle, I could think about two more years," the 31-year-old was quote