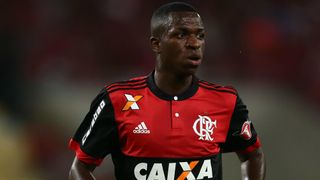 Recently crowned LaLiga champions Madrid have completed a deal to sign 16-year-old Brazilian Vinicius from Flamengo in July 2018 for a reported €45million.

Vinicius cannot link up with Madrid until after his 18th birthday next year, but Zinedine Zidane's men plan for him to stay at Flamengo until July 2019 unless both clubs agree otherwise.

The teenage sensation – who only played his first professional game in May – also had a lucrative offer to move to the Camp Nou but he preferred the Spanish capital.

"If anyone receives criticism, it will be Real Madrid for the bet they have made," Pena told Globesporte.

"For them, they are assured it will work. There were other clubs interested and one offered more money.

"Barcelona put together a more lucrative package for the player.

"Many believe that it is madness [what Real Madrid are doing] but they were not the only ones involved in the supposed madness. They are not the only crazy ones willing to pay for the quality of Vinicius."

"People get the impression that he made the decision based on financial situation but it's not the truth. I assure, the negotiating stance that Real Madrid took was better."