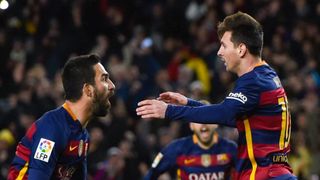 Barcelona opened up a comfortable lead in their Copa del Rey last-16 clash with Espanyol after winning the first leg 4-1 against nine men at Camp Nou.

After falling behind early on, thanks to Felipe Caicedo’s goal, holders Barca retaliated within four minutes thanks to Lionel Messi and went on to dominate proceedings.

Messi added his 241st goal in 241 home matches for the hosts with a sensational free-kick just before half-time and then teed up Gerard Pique in the early stages of the second period for Barcelona's third as Espanyol were unable to handle Luis Enrique's men.

The away side were reduced to 10 men with 18 minutes left following the dismissal of Hernan Perez and then saw Pape Diop handed a straight red – apparently for a comment made in the direction of Luis Suarez – as Espanyol lost all discipline late on.

Neymar rubbed salt into their wounds with an excellent fourth at the end of Messi's second assist of the night in the 88th minute.

The evening started in a very different fashion for Espanyol, however.

Having soaked up early pressure from Barca – for whom Ard Turan was making his debut – they took the lead against the run of play in the ninth minute. Marco Asensio dispossessed Dani Alves inside the visitors' half and broke 60 yards before playing in Caicedo, who beat Marc-Andre Ter Stegen to his bottom left-hand corner.

Pau Lopez had to be alert when Messi broke through, with the Espanyol goalkeeper again leaping at the feet of a Barcelona forward to maintain his clean sheet, but his goal was breached soon after.

Andreas Iniesta's throughball picked out Messi and the Argentina star fired beyond Lopez.

Ter Stegen tipped over Abraham Gonzalez's free-kick as Espanyol maintained the rapid pace of the game after the Barcelona equaliser, while Neymar dragged narrowly wide as the visitors struggled to contain Barca's front three.

Messi put the hosts in front in stunning style two minutes before half-time. After being chopped down 25 yards from goal, the Camp Nou darling dusted himself down and curled and exquisite free-kick past Lopez, diving to his left.

Barca added a third inside four second-half minutes. Iniesta and Messi combined down the left, with the latter crossing for Pique to slide home from close range.

Messi came within a foot of completing his hat-trick on the hour mark, as he fired narrowly wide from 20 yards out, and then failed to tap home Neymar’s cross under pressure from two defenders, while Arda Turan was denied a debut goal by Lopez at his near post.

Lopez leapt to his left to turn Neymar’s 65th-minute free-kick to safety, while Espanyol's difficult night was made even harder by the dismissal of Perez in the 72nd minute for a second bookable offence.

Suarez was denied by Lopez with 15 minutes remaining and was then at the epicentre of the incident which saw Diop handed his marching orders. Referee Juan Martinez Munuera was stood within 10 yards of the pair and was quick to reach for his red card following a comment made by Diop to the Uruguayan.

Barca made the most of their two-man advantage with a fourth goal in the closing stages as Neymar exchanged passes with Messi and produced a sensational volley to wrap up a first-leg thumping.

- Lionel Messi has scored 10 goals in his last five derbies against Espanyol at Camp Nou.

- Messi is the only La Liga player to have scored in six different competitions this season.

- No other Spanish player in La Liga has made more assists than Marco Asensio this season (seven in all competitions).