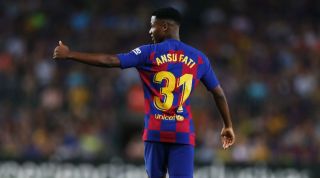 Barcelona are keen to keep hold of Ansu Fati for El Clasico in October.

Fati has taken La Liga by storm in the early stages of the campaign, emerging as one of the brightest talents that Barça has produced in recent years.

The 16-year-old has played in six games already this season, scoring two goals.

Fati was born in Guinea-Bissau, and until recently was a citizen of his birthplace.

But he wanted to represent Spain and has now acquired a Spanish passport so that he could feature at the Under-17 World Cup in Brazil.

However, according to Marca, Barcelona are in the process of trying to deny Fati the chance to play for la Roja's under-17 side.

The Catalan club would rather he stay in Spain so that the youngster can feature in the match against Real Madrid on October 26.

The World Cup takes place from October 26-November 17 and Spain have been drawn in a group alongside Argentina, Tajikistan and Cameroon.

Fati is now regarded a fully fledged first-team player at Barcelona, such is his rapid rise this season.

It's believed that the Blaugrana see him as the future of their attack, and Lionel Messi has been particularly complimentary of his protégé this campaign.

Despite his growing reputation within the club, however, it is almost certain he will go to Brazil if called up to Spain's under-17s.

Politically, the Spanish federation do not want blowback from a new citizen rejecting the opportunity to play for them.

Barcelona will be hoping that their negotions with the Spanish FA go smoothly, however, and that they can reach some form of gentleman's agreement regarding Fati's international call-up.

There is precedent for such a move: in September 2017, Jadon Sancho was named in England's squad for the 2017 U17 World Cup but Borussia Dortmund preferred he stayed with them. All parties eventually reached an agreement where he would be available for the group stage, and Sancho returned to BVB at the last-16 knockout round.

9 of the weirdest players awards we've seen in football