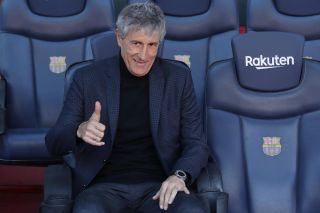 Quique Setien will take charge of Barcelona for the first time when they host Granada on Sunday night.

The 61-year-old is in the unusual position of taking over a side top of the table at the mid-point of the season, having been named as the replacement for Ernesto Valverde who was shown the door after a disappointing December which allowed Real Madrid to move level on goal difference.

“I see this as a gift, and a very unexpected one,” the ex-Real Betis coach said. “I’m going to try and enjoy every day at this club until I have to leave.

“I’m going to use the same means as when I went to every club – to try to get the same enthusiasm out of the players and to put the same love into the game.”

Setien’s appointment was announced on Monday, giving him a full week to work with his players before their first match.

“The first week’s gone well,” Setien told a press conference. “Much better than I expected. When you come to a new team there’s always uncertainty about how they’re going to respond. There’s always a stimulus from the players, you see they are very keen because of the change.

“I’ve been really surprised by the players and how accepting they are of a coach’s new ideas.”

Setien said change would take time but that he hopes the impact is already apparent in Sunday’s match against a Granada side who have climbed to 10th in the table.

“I hope it won’t be an overexcited Barca but a motivated Barca, ready to put in place the changes we have worked on this week, but it’s not going to happen overnight,” he said.

Barca surprised many with the ruthlessness shown in sacking Valverde, given he had delivered back-to-back titles and had his side in position to contend for a third, but Setien said it came with the job.

“When coaches move into this profession, we know the risks involved and we’re prepared for that,” said Setien, who may have to do without the injured Luis Suarez for the rest of the season.

“Whether it is fair or unfair, right or wrong, that’s not for us to think about. We need to do focus on our job. We hope things go well and if they don’t we know what we’re up against.

From this morning’s workout. You love to see it. pic.twitter.com/6RnDnnmilg— FC Barcelona (@FCBarcelona) January 18, 2020

“The demands here are total. Whether you are first or fifth, you need to be fighting to be at the top, to win every competition. That’s the DNA of this club.”

Granada coach Diego Martinez has told his players to be excited by a daunting week which also includes a trip to face Sevilla at the Ramon Sanchez Pizjuan as well as a midweek Copa Del Rey clash at Badalona.

“The beautiful week ahead of us is a motivation,” said Martinez, well aware that Granada have never won at the Nou Camp.

“Barcelona will force us to do things that we do not want to do. It is a challenge of maximum difficulty – we know the statistics and we want to turn it around.

“You have to be right, be brave, not be afraid and not make mistakes that can determine the game. It’s easy to say but you have to do it.”

Despite what those statistics say, Granada certainly have the potential to make life difficult for a Barca side who might be adjusting to life under Setien.

Granada won the reverse fixture 2-0 earlier in the season, and their last trip to the Nou Camp ended in a narrow 1-0 defeat in 2016.