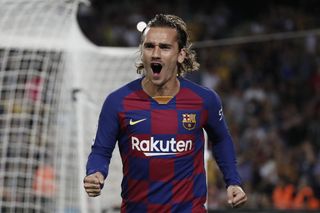 Barcelona bounced back from a shock 2-0 defeat to Granada with a 2-1 home win over Villarreal to move up to fourth in the LaLiga table.

Antoine Griezmann and Arthur got the first-half goals at the Nou Camp as Barcelona moved to within a point of top trio Granada, Athletic Bilbao and Real Madrid.

Ernesto Valverde’s side did not have it all their own way as Santi Cazorla pulled a goal back for Villarreal just before half-time.

But that was as close as the visitors came to registering another shock result against Barcelona with the defeat leaving Villarreal eighth in the table.

Barcelona claimed the lead after just 10 minutes as Griezmann applied a deft flick to Lionel Messi’s near-post corner to guide the ball over Villarreal goalkeeper Sergio Asenjo and into the net.

The home side doubled their lead five minutes later as midfielder Arthur beat Asenjo once more with a shot from 25 yards out which flew into the top corner.

The Brazilian was given space as the Villarreal defenders stood off him and he took his chance with a fine finish.

Barcelona’s Sergi Roberto was the first player to be shown a yellow card after 26 minutes when the midfielder was cautioned for a challenge on Cazorla.

The Villarreal midfielder handed out further punishment to Barcelona a minute before the break with a fine long-range effort of his own.

Messi did not return for the second half with his place being taken by substitute Ousmane Dembele.

Villarreal had the first opening of the second half three minutes in but this time Cazorla was denied by Ter Stegen who made a good save at his near post.

Three minutes later substitute Dembele fed Luis Suarez but he was unable to get enough power on his effort which made the save more comfortable for Asenjo.

How impressed were you with Ansu Fati's 12 minutes on the pitch in #BarçaVillarreal? ⚡🤯 pic.twitter.com/6YfOrJci9E— LaLiga (@LaLigaEN) September 24, 2019

Barcelona threatened again four minutes later when Junior fired in a cross but the Villarreal defence were able to clear.

Ter Stegen made another good save with 21 minutes remaining as he kept out a shot from the edge of the area by substitute Moi Gomez.

Teenager Ansu Fati replaced Suarez with 12 minutes to go but was given offside as he finished off an early opening.

Shortly after the 16-year-old fired just wide as Barcelona hunted a third goal.

Gerard Pique saw his late free-kick from the edge of the area kept out by Asenjo and Griezmann also shot over the bar late on but Barcelona had already done enough to secure the victory.