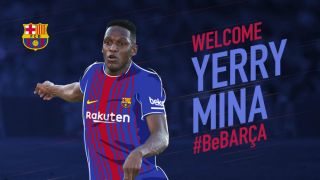 Barcelona have announced their second signing of 2018, with defender Yerry Mina joining LaLiga's leaders from Brazilian side Palmeiras for €11.8million.

Mina has signed a five-and-a-half-year deal with the Catalan giants.

A deal for Mina had been set up for after the World Cup, but Barcelona were keen to complete an early move for the defender, who made clear his desire to join Ernesto Valverde's side.

The table-toppers said in a stement: "Yerry Mina now comes to Barca with the opportunity to continue developing as a footballer following his move to Europe. Without a doubt the Colombian has the potential to make it."

Mascherano has started only six LaLiga games so far this season, with Thomas Vermaelen typically selected by Valverde as Gerard Pique's partner in the absence of the injured Samuel Umtiti.

Umtiti has also been linked with a transfer away from Barcelona, with Manchester City and Manchester United among the clubs linked with triggering the France centre-back's €60m release clause.

Barcelona have already added to their squad this month, having finally completed a long-awaited move for Brazil international Philippe Coutinho.

After a string of failed bids for the Liverpool playmaker in August, Barca have agreed to pay a reported club-record fee of £142million for Coutinho, who signed a five-and-a-half-year deal at Camp Nou.