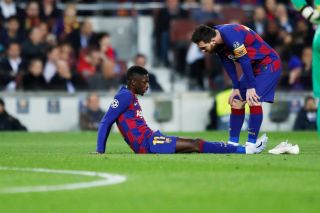 Barcelona have 15 days to sign a striker after La Liga’s medical commission confirmed that Ousmane Dembele will be sidelined for at least five months.

The club submitted their application to bring in a replacement last week, after Dembele had an operation on his torn hamstring, and approval was granted this morning.

Barcelona are now able to sign a striker providing they are either out of contract or registered to another Spanish side.

So far they have been linked with Real Sociedad’s Willian Jose, Getafe’s Angel Rodriguez and Levante’s Roger Marti amongst others.

Lucas Perez and Martin Braithwaite, formerly of Arsenal and Middlesbrough respectively, were also rumoured to be of interest.

Barcelona are prioritising an affordable short-term solution to their current predicament, and are reportedly looking to spend no more than €12 million.

Should they sign someone from a divisional rival, that club will be unable to bring in a replacement of their own.

Barcelona are second in the table, one point behind Real Madrid, but closed the gap over the weekend as they beat Getafe while Madrid drew at home to Osasuna.

They have won four of their last five league games, since Ernesto Valverde was sacked and Quique Setien took over as manager.

They face Napoli in the first leg of their Champions League round of 16 tie next week but any new signing will be unable to play. They are limited to matches in La Liga.