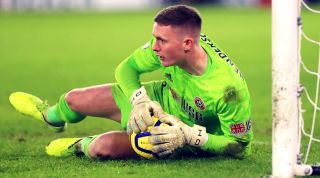 If anything, Dean Henderson’s loan seasons at Sheffield United have gone too well. Henderson probably wasn’t supposed to be a viable alternative to David De Gea for a few more years, but with six excellent Premier League months now behind him and De Gea’s own form in recession, that’s exactly the situation facing Manchester United in the summer.

They’re not equals, not just like that. De Gea remains the more experienced and capable of the two and, naturally, his bad form is some way off being described as permanent. It shouldn't be forgotten, either, just how much credit he has in the bank or what United’s post-Alex Ferguson experience might have looked like had he not been so routinely excellent during those years.

But this is a conversation now; Henderson vs De Gea is a legitimate debate.

It’s one which De Gea will ultimately win. For a variety of reasons, beyond just those listed above. He earns far too much to be a second choice (£350,000/week) and is probably on more money than any other club in Europe would be willing to offer. Irrespective of his form, United would also demand a King’s Ransom for a player who, at a 29, is entering what should be his goalkeeping prime.

At the same time, Henderson could credibly believe himself to be the in-form English goalkeeper and, whether Gareth Southgate starts him at Euro 2020 or not, next season he’s unlikely to settle for a place on the United bench and for a few Carabao Cup games. Nor, you imagine, would he welcome the transient state of another loan.

It creates a clear choice: either he plays, or he’s going to want to be sold.

For him personally that’s a position of strength, but he needs to be careful. Paris Saint-Germain are reportedly interested, while he could theoretically be an option for most sides in the Premier League's top six. So, he’s going to have options and most of those would involve earning considerably more money than Sheffield United would be able to offer.

But what’s made him successful at Bramall Lane? His ability, yes, but also who he’s been able to work with. Chris Wilder has managed Henderson’s career extremely well so far, seemingly knowing how to speak to him and how to respond to his peaks and troughs.

That was demonstrated clearly enough back in October, after Henderson made that terrible mistake against Liverpool. With a player embarrassed by a mistake and humiliated in front of a national television audience, most head coaches would have been publicly consoling. They’d have offered a platitude or two, reminding everyone that mistakes are inevitable, goalkeepers play in an exposed position and, in any case, "Dean would learn from this and come back strong".

Wilder didn’t. He challenged Henderson to "be better" and insisted that he wouldn’t "put (his) arms around him".

That’s unusual. It’s also bold. The modern footballer is more prone to sulking than his predecessor was and doesn’t generally react well to having his ego pricked. In this instance, though, Wilder was entirely vindicated. Henderson responded with an excellent performance away to Watford, followed by a second clean-sheet in a row at home to Arsenal. In hindsight, it was absolutely the right approach and was a testament to not only Henderson’s maturity (in accepting the criticism), but also to Wilder’s understanding for one of his players – not just who he is, but what he responds to.

That kind of relationship is not to be taken for granted. Henderson is rightly attracting admiring glances from all sorts of clubs, but the virtues of his present situation are self-evident. He’s playing behind a stable defence who are extremely well-coached. In front of fans who hold him in the highest regard. And for a coach who knows how to treat him. Henderson has earned his good fortune, but that's a fairly privileged position to be in.

Not least because a young goalkeeper is fragile and his reputation is even more so.  When summer arrives and a decision over his future needs to be made, Henderson would be wise to find a balance between his ambition and preserving those conditions. Together, they are the foundation of an excellent career and, as a result, not to be treated lightly.

LONG READ Inside Lazio’s ultras: on the ground with Italy's most notorious fans