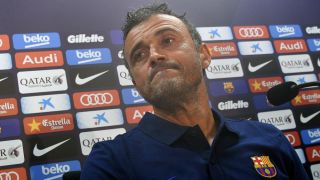 Barcelona are in the market for "a true striker" during the current transfer window, according to coach Luis Enrique.

The LaLiga champions have already reinforced their squad with the arrivals of French defensive duo Samuel Umtiti and Lucas Digne and midfielder Denis Suarez from Villarreal, who he joined from Barcelona B last year in a deal containing a buy-back clause.

But Luis Enrique is still eager to bolster his forward options and ease the burden on mercurial front three Lionel Messi, Luis Suarez and Neymar.

"We're looking for a striker but the best thing would be to sign another player, if there is a good option," he told a news conference.

"We're looking for a pure striker, who moves close to the area without dropping wide, because we have a lot of players for the wings, like Denis, Arda [Turan], Andres [Iniesta]. [We want] a true striker, who has goals."

Luis Enrique staunchly defended Arda, who has come in for criticism after some underwhelming displays last season having joined Barca from Atletico Madrid.

The coach pointed to initial scepticism over Luis Suarez, whose second campaign at Barcelona yielded 59 goals from 53 games last time around.

Luis Enrique: "We have improved a lot in areas we used to suffer and we continue getting better" July 21, 2016

"These guys need to adapt, they're not robots. I want [Arda] to continue here.

"He learned a lot in his first year. He did everything we asked and we won titles. I'm sure he'll continue here and continue helping us. I have total confidence."

Although Luis Enrique wants to maintain a goalkeeping setup of the two senior men and Jordi Masip, he accepts the situation could change if a significant offer is tabled.

He added: "I want all three of these goalkeepers here. Everything is negotiable, I'd like the goal to be covered by a truck.

"Everybody wants to play more, across the pitch. I have to manage it and I'll manage it as I've always done - for the best of the team. If there's a huge offer on the table for a player, we'll see what happens."