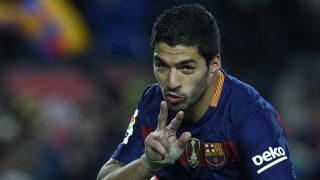 Athletic Bilbao will have to cope with the added threat of Luis Suarez when the Uruguayan returns from a ban to bolster an already formidable Barcelona forward line in the second leg of the Copa del Rey quarter-final at Camp Nou.

Suarez was handed a two-match Copa suspension for his part in a confrontation following the first leg of Barca's last-16 meeting with Espanyol this month.

The 29-year-old sat out the return fixture as well as the opening leg of the last-eight meeting with Athletic, which Barca won 2-1 thanks to goals from Munir and Neymar.

A return to Camp Nou is unlikely to stir positive memories for Athletic, who were trounced 6-0 on their last visit in the league on January 17 - Suarez proving their main scourge on that occasion with a hat-trick.

Holders Barca will be fancied to progress to the semi-finals given their advantage, although Aritz Aduriz provided last year's runners-up with a late lifeline a minute from time at San Mames.

The Athletic striker also attracted some criticism for appearing to drag his foot across the back of a prone Neymar in the first leg, having tripped the Barca man, who had just flicked the ball over his head.

Aduriz said afterwards that Neymar should change his attitude, but the Spaniard was in the headlines for the right reasons at the weekend with a brace in Athletic's 5-2 La Liga hammering of Eibar.

The first of those was a stunning scissor-kick volley and Aduriz's 13 goals in 20 league outings this season have seen him linked with a call-up to the national squad, with Vicente del Bosque recently praising his performances.

"[Del Bosque's words] were flattering," he said. "It's a compliment to me that Vicente del Bosque, who I appreciate as a person and coach, acknowledges me.

"We're going to Camp Nou to have a good game and play with all the enthusiasm in the world."

Aduriz may not have to face his foe Neymar after the Brazilian missed Saturday's 2-1 win over Malaga with a slight hamstring problem.

Neymar trained separately at the weekend as Barca extended their unbeaten run to 24 matches in all competitions thanks to goals from Munir and Lionel Messi.

Luis Enrique gave his squad the day off on Sunday before returning to training on Monday, although Sergio Busquets and Arda Turan were absent through illness and are doubtful for the match.

Jordi Alba picked up a hamstring injury in the 6-0 demolition and is expected to miss out again, leaving Jeremy Mathieu, Adriano and Sergi Roberto vying for the left-back spot.