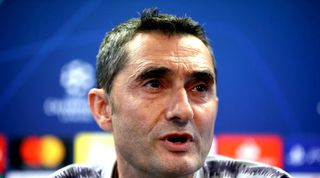 European football’s governing body introduced new rules in 2011 to prevent clubs across the continent spending more than they earn.

The La Liga champions have a budget of more than €1 billion (£883m) for the 2019/20 season, which is higher than that of any other team on the planet.

However, it also means that Barcelona need to meet a higher threshold for revenue, with Marca reporting that £152m is the target from player sales.

The Catalan outfit have already reduced that figure, with Malcom, Andre Gomes, Jasper Cillessen and Philippe Coutinho all departing the Camp Nou ahead of the current campaign.

Malcom joined Zenit Saint Petersburg for around £35m, while Andre Gomes’ loan move to Everton was made permanent.

Cillessen ended his tenure as the Blaugrana’s back-up goalkeeper by signing for Valencia in a deal worth £31m, and Coutinho was loaned to Bayern Munich until the end of the season for an initial fee of £7.5m.

There is still work to do, though, with Barcelona required to raise another £88m in order to avoid sanctions from UEFA.

With the transfer window now closed until January, they will have to wait until the new year to balance the books, with Ivan Rakitic among those who could depart.

Barcelona spent heavily in the summer market, acquiring Antoine Griezmann from Atletico Madrid for £106m, Frenkie de Jong from Ajax for £66.3m, Junior Firpo for £16m and Neto for £23m.

Ernesto Valverde’s side also attempted to bring Neymar back to the Camp Nou, although they were ultimately unable to meet PSG’s demands.

The club’s wage bill is predicted to rise to £567m, which is another reason why Barcelona will need to trim their squad to comply with Financial Fair Play regulations.

The Catalans return to La Liga action on Saturday, when they face Granada at the Estadio Nuevo Los Carmenes.