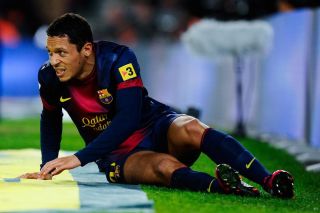 The versatile Brazilian has made three appearances in all competitions so far this season as Barca have made a strong start to 2014-15 under Luis Enrique.

With the majority of the squad away with their countries for the international break, Barca's numbers in training on Friday were minimal.

Adriano was joined by the likes of Rafinha and Thomas Vermaelen in training separately as the trio continue their recoveries.

Adriano is "troubled by a twinge in his right thigh", while Rafinha has been struggling with a similar problem and Vermaelen is yet to feature this season since moving from Arsenal after a hamstring injury picked up with Belgium at the World Cup.

Following the international break, Barca return to action in La Liga on October 18 with a home clash against newly promoted Eibar.