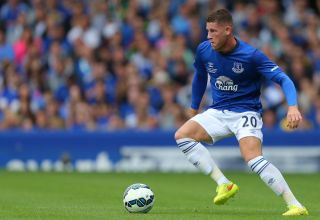 The 20-year-old sustained medial ligament damage in training on Friday as Everton finalised preparations for their Premier League opener at Leicester City on Saturday.

Barkley is expected to be sidelined for between six to eight weeks, though a statement published on the club's official website did not put a timeframe on his return.

It read: "Ross Barkley will miss the start of the Premier League season after suffering a medial knee ligament injury in training.

"The England international, who signed a new long-term contract at Goodison Park last month, is undergoing a scan to determine the severity of the injury.

"The club will now await the results of the scan to determine the timescale that Barkley will be out of action."

The news comes as a significant blow to Everton boss Roberto Martinez, who may also be without record signing Romelu Lukaku at Leicester following the Belgian's exertions at the World Cup.

Should Barkley be out for two months, he would miss seven Premier League fixtures, including games against Arsenal, Chelsea, Liverpool and Manchester United.

However, if the England international - who signed a new four-year contract at Goodison Park last month - can recover in six weeks, he could make his return in the Merseyside derby at Anfield on September 27.