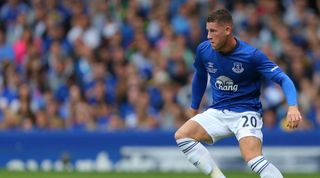 The 20-year-old is yet to feature for Martinez this term after suffering medial ligament damage in training during the close-season.

However, after progressing well with his recovery, Martinez now thinks Barkley could soon be back involved with the rest of the squad.

Martinez, who could welcome back Steven Pienaar from a groin problem for Sunday's Premier League trip to Manchester United, warned it could still take some time after the international break before Barkley is back in match action.

"Ross is developing well and I hope he can join the group next week to start maybe working with the full team as early as probably next Wednesday," the Spaniard explained on Friday.

"He will be back to working with the team after the international break.

"We don't know how long it will take Ross to be able to be match fit."

Without Barkley, Everton have struggled in the top flight and have won just once all season in the Premier League.

However, Martinez's men picked up a point against Krasnodar in the UEFA Europa League on Thursday to help Everton top Group H, with the former Wigan Athletic manager pleased with his side's continental campaign.

"It's exactly what we needed. When you face a team in south Russia you have to be able to get through a difficult game and impose a positive result," he said.

"I was very pleased with the experience.

"Last season we played some good football but playing in Europe is stretching the squad and pushing us to levels we wouldn't [otherwise] be able to reach."