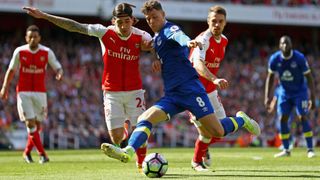 Ronald Koeman confirmed an announcement will be made regarding Ross Barkley's Everton future on Monday, following the season-ending defeat at Arsenal.

The Toffees went down 3-1 at Emirates Stadium, Romelu Lukaku's 25th Premier League goal of the season the only bright note of an otherwise disappointing conclusion to Koeman's debut campaign in charge.

Barkley is out of contract in June 2018 and has been heavily linked with a move away from Goodison Park as the club seek to avoid losing the England international for nothing in 12 months.

The midfielder started on the bench at Arsenal on Sunday but was introduced midway through the first half as Koeman attempted to exploit Everton's man advantage following Laurent Koscielny's red card.

RK: "Overall, we have had a really good season but there are improvements which need to be made." May 21, 2017

Barkley has been offered a new deal but is yet to make his response public, and predictably Koeman was quizzed on the situation following the game.

"I will speak to the board tomorrow and we will make a statement," the manager said, in quotes reported by BBC Sport.

"He was one of the players who didn't show productivity today. Overall it's not about one player, but I understand why you asked about him.

"That's what we need to change. We need to find players with more productivity.

RK: "My focus is to try to improve this team. We need some more aggression and productivity." May 21, 2017

"It wasn't good enough. We saw today what we need for the next season. We need more productivity out of possession. That's the difference between us and Arsenal.

"We did everything to win the game but we had to score in the first half. It was a long time 11 v 10 and a penalty isn't enough.

"I know everything, that's not for you. The board will back me. We want more quality in. That's what they will support."