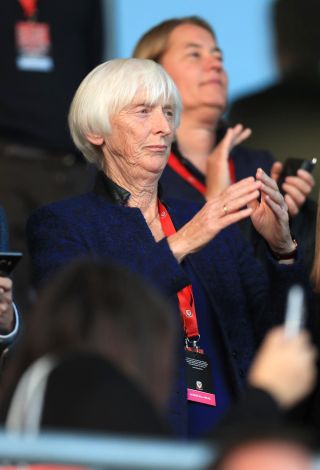 The Football Association’s director of women’s football Baroness Sue Campbell hopes BT’s 4-3-3 Home Nations strategy will ensure the next generation of girls taking up the sport have the volunteers to handle the growth.

Phil Neville led the England Women to the World Cup semi-finals last summer and it has resulted in a spike in participation for the women’s game.

While that will hopefully produce even more Lionesses for the future, to do that volunteers are needed at grassroots level.

On Tuesday, BT announced a 4-3-3 Home Nations strategy which will use the power of football and technology to release the potential of para and disability, grassroots and women’s football communities across England, Scotland, Wales and Northern Ireland.

A key part of the partnership will be BT bringing 50,000 new women directly into the grassroots eco-system via the FA Playmaker online course as well as offering bursaries and mentoring schemes for women wanting to progress in football.

Campbell said: “As the women’s game has exploded, which it has, and we are seeing more and more girls coming into the game, our big challenge is we haven’t got enough people to take care of them.

“All I am hearing is we have all these young girls coming to the club, but no people and if you put people on a level one coaching course, it is expensive, you have to give up a few days and you have to travel, which for people in local communities isn’t always doable.

“The Playmaker, which is four-and-a-half hours if you study all five modules, gives you access to a course where you can become a safe and well organised volunteer pretty quickly. There is no good growing participation, we have to grow people to make it.”

Recently the state of pitches in the Women’s Super League has come under scrutiny with several postponements.

Campbell admitted the surfaces must be “equal to the incredible quality of the players we have now got” with investment set to occur into grass pitch improvements and 3G.

Ian Maxwell, CEO of the Scottish FA, said: “BT have some ambitious plans to combine football and technology to engage communities across the nation.

“Their goals for grassroots, girls’ and women’s and para-football dovetail perfectly with our own and we are excited at the opportunities our partnership with them holds for Scottish football.”

A key goal for BT – in what is a five-year partnership – is to create closer football communities and opportunities through new digital and football skills initiatives.

The Football Association of Wales’ chief executive Jonathan Ford added: “This is a fantastic opportunity to bring people on board and hopefully some of them will pick up a whistle, some will be a coach and some will be an administrator because not everyone can be on the field of play.”

“We know where they are and how to work with them, but what BT adds is a level of connectivity that we couldn’t add in the first place.

“We won’t solve it tomorrow, but I hope in five years time we will all be in a much better shape because of this partnership.”

Aside from the FA Playmaker partnership, BT will combine the power of its technology, innovation and partnerships to inspire the next generation of disability players.

This footballing programme, one of the largest ever to run across the UK in partnership with the FA, Scottish FA, Irish FA and FA of Wales, is not linked to any Home Nations bid for the 2030 World Cup.

“It is not connected to the 2030 World Cup,” BT’s CEO of Consumer Division Marc Allera confirmed.

“We are used to long-term and prefer to work with partnerships on a long-term basis and who knows where this one will take us.

“The great news is this is all four Home Nations, it is a long-term partnership and we have set our some clear goals.”