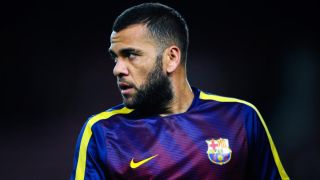 Dani Alves has been linked with a move away and the 31-year-old's contract expires at the end of the season, and his agent has listened to offers from other clubs.

Seemingly in no rush to finalise a new deal for Dani Alves, Bartomeu admitted to being uncertain if the defender would stay.

"We are planning next year. [Carles] Rexach and [Ariedo] Braida are other directors. They are working," he told RNE Radio.

A player Bartomeu is more eager to keep at Barca is superstar Lionel Messi, who he hopes will finish his career at Camp Nou.

"He is happy in Barcelona, in fact he is a Catalan," he said.

"Messi has been with us for years and we hope that he hangs his boots up here."