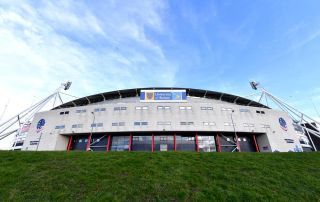 Laurence Bassini claims to have taken control of Bolton despite the club’s insistence his potential takeover is off.

The Championship side issued a statement on Thursday evening saying there would be no further discussions with the former Watford chairman.

On Tuesday Bassini had committed to providing proof of funds for his potential purchase to the EFL within 48 hours, but Bolton say that deadline – itself an extension on a previously agreed date – passed without the required information being shown.

Bassini, however, views the matter differently.

In a statement issued to Sky Sports News, he said: “I have taken control of the club this morning and instructed staff not to make any further statements. I have proof of funds and a watertight contract.”

He added: “I will be attending the Nottingham Forest game on Sunday and I will put things right at Bolton Wanderers. Ken Anderson (chairman) cannot sell the club to anyone else, he is on notice and would be in breach of contract should he try to, I am the only person who can buy Bolton Wanderers.”

The EFL has not commented on this latest development.

Bolton’s statement read: “Following the request from Mr Bassini to allow him a further 48 hours to complete his funding package and present this to the EFL, we can now confirm that no subsequent meeting took place and nothing further has been presented for the board of the EFL to consider.

“Given the urgency of the situation, which has been expressed to Mr Bassini, we now consider his approach for the club at an end and no further discussions will be entered into on the matter with him.”

Bassini’s takeover was originally announced on April 17 as the cash-strapped club looked for a buyer to save them from administration. Bassini, who was banned from holding a position of influence at any EFL club for three years in 2013, was looking for a way to return to football.

Despite Bassini’s latest comments, administration would appear to remain a serious possibility for Bolton, who have also been relegated after a season of turmoil.

A statement from the EFL earlier on Thursday said that should Bolton go into administration, they would not be obliged to fulfil their outstanding fixture against Brentford.

That game, rearranged for next Tuesday, was postponed last weekend as unpaid players went on strike.

The statement read: “The rationale for adopting that approach is that it is the board’s view that any administrator should be allowed to concentrate their efforts and available funding on finding a purchaser for the club, rather than staging the fixture in these unprecedented circumstances.”