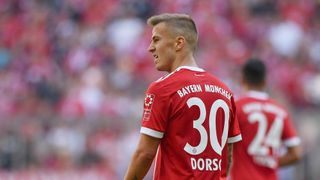 Niklas Dorsch is still ready to walk away from Bayern Munich at the end of the season despite enjoying a dream debut for the Bundesliga champions.

Dorsch was one of three debutants and four graduates from Bayern's youth academy to start against incoming coach Niko Kovac and his Eintracht Frankfurt side on Saturday.

The 20-year-old central midfielder took his opportunity in style, opening the scoring and putting in an assured performance as Jupp Heynckes' men eased to a 4-1 victory.

It is a performance that will put potential suitors on high alert after Bayern's reserve team captain confirmed after the match that his intention to seek senior football elsewhere had not wavered.

"The state of affairs was that I definitely want to take the next step," Dorsch told Sport1.

Dorsch has reportedly rejected a contract extension at the Allianz Arena, with his deal set to expire when the current campaign concludes.

He does not see parallels between his situation and that of Lars Lukas Mai, who also featured against Frankfurt.

Mai was similarly thought to be on the verge of leaving Bayern but the 18-year-old defender signed his first professional contract on Friday.

"I'm not Lukas Mai, I do not know how Lukas did that, but it was clear to me before and that's not going to change anything about me personally," Dorsch added.