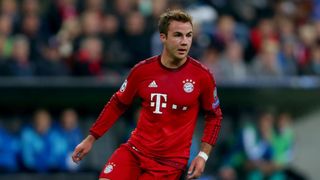 Bayern Munich sporting director Matthias Sammer is not too worried about Mario Gotze's recent comments that his long-term future at the club is undecided and has made it clear they will sit down with the Germany international shortly to resolve his situation.

Sammer quickly dismissed suggestions Gotze could leave Bayern for Liverpool in the January transfer window when such rumours surfaced, but the 23-year-old then fuelled speculation that he could be on the move after all by stressing his future depends on new coach Carlo Ancelotti's plans for him.

However, Sammer has moved to clear up Gotze's situation and sees no reason to worry about the former Borussia Dortmund player's plans for the future.

"I said it was madness when there were rumours about a transfer in January, whereas Mario was talking about the end of the season," Sammer told reporters.

"Mario's comments were an indication that we will have to sit down at some point in the upcoming months and discuss his situation. That is only logical.

"I cannot see anything negative about what Mario said. He has put a few things up for discussion and we will clarify everything in the second half of the season.

"A lot of things will have been resolved by then."

Gotze, who is currently recovering from a hamstring injury, has a contract with Bayern until June 2017.