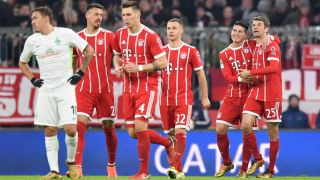 Thomas Muller and the returning Robert Lewandowski scored two apiece as Bayern Munich earned a come-from-behind 4-2 win over struggling Werder Bremen despite an underwhelming showing from the champions.

Bremen took the lead through Jerome Gondorf and hit back again after Muller and Lewandowski – back from a knee injury – had turned things around, a Niklas Sule own goal levelling matters in the 74th minute.

But the same Bayern double act stepped up to the plate when needed, with Muller's second strike representing his 100th Bundesliga goal.

The away side showed few signs of this season's struggles during the first half, hitting the post early on and then scoring in the 25th minute through Gondorf, as the performance belied their lowly league position of 16th.

Inevitably Bayern fought back and equalised four minutes before half-time, with Muller netting his third league goal of the season in style.

Lewandowski then grabbed his first just after the hour, giving Bayern – who were far from their fluid best – the lead for the first time, though that did not last long as Sule put past his own goalkeeper.

But the champions turned on the style late on, Lewandowski powering in a header and Muller adding a landmark strike.