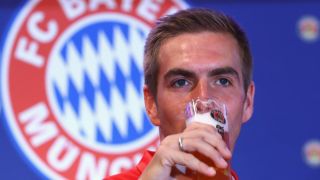 Philipp Lahm will be added to Bayern Munich's Hall of Fame after claiming the Bundesliga title for an eighth time in his distinguished career ahead of his impending retirement.

Bayern's captain will make his final career appearance against Freiburg at the Allianz Arena on Saturday having been at the club for his entire career, barring a two-year loan spell at Stuttgart.

Lahm, who skippered Germany in their World Cup triumph in 2014, will become the first Bayern player to join the Hall of Fame since legendary goalkeeper Oliver Kahn in 2008.

"Philipp Lahm is one of the most deserving players in the recent history of Bayern," said club chairman Karl-Heinz Rummenigge.

"Both on the pitch and off it in his role as captain, he has been a truly important person for the club.

"He deserves this accolade, which puts him up there with the greats of Bayern. The club would like to thank Philipp Lahm for the amazing performances he has shown for Bayern."

"The final training session with and was very emotional. I'm proud to have coached these two players." 19 May 2017

Rummenigge, Franz Beckenbauer, Sepp Maier, Gerd Muller and Lothar Matthaus are among the other players to feature in the Bayern Hall of Fame.