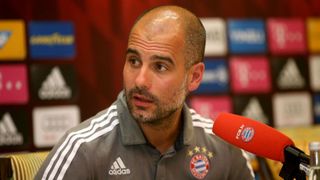 Pep Guardiola is confident Bayern Munich have what it takes to cope with the absence of Jerome Boateng when they take on Hoffenheim at the weekend.

The Germany international sustained a ruptured groin muscle in Bayern's 2-1 win over Hamburg last week and faces a lengthy spell on the sidelines as a result.

Boateng's injury leaves Guardiola with a selection headache at the back, but the former Barcelona boss believes he has a number of adequate alternatives.

"We will miss Boateng, but other players will fill the void," Guardiola said at a news conference.

"We have [Medhi] Benatia, [David] Alaba, [Javi] Martinez, Rafinha, there are plenty of options. Martinez and Benatia have qualities that Boateng doesn't have. But of course, there are some worries.

"We did everything we could to prevent Jerome's injury, but that was impossible.

"Hoffenheim are a team that always create a lot of chances. Our tactic depends on the players I have available. I wouldn't say there's some sort of tactical revolution coming up.

"It is hard to win the treble, but the players have been doing great so far."

Bayern have every reason to feel confident ahead of Sunday's encounter at the Allianz Arena, having not lost any of their last 15 league games against Hoffenheim (winning 11 and drawing the remaining four). No other top-flight pairing has seen a club go winless against another more than nine times in a row.

Apart from Boateng, Bayern are still without Mario Gotze as the attacking midfielder continues his recovery from a hamstring injury, while Franck Ribery is also likely to miss out due to muscular problems.

Hoffenheim, meanwhile, will be aware of the uphill task at hand, but can draw confidence from last week's 1-1 draw with Bayer Leverkusen.

They remain 17th in the Bundesliga table, though, and desperately need a good result in order to stay in touch with 15th-placed Stuttgart and 16th-placed Werder Bremen, both four points ahead on 18 points.

However, TSG's recent form against Bayern provides cause for concern. Hoffenheim have picked up just one point from their last seven visits to the Allianz Arena (3-3 in March 2014), while they suffered their heaviest Bundesliga loss in Munich in March 2012 (7-1).

They came close to springing a surprise in the reverse fixture back in August, but a late Robert Lewandowski strike eventually saw them beaten 2-1.

- Guardiola’s side have won their last 15 games at home in all competitions, the club’s longest run since 2013 (18 between March and November).
- Kevin Volland netted after just nine seconds of FCB’s 2-1 win over TSG before Christmas, holding a league record alongside Karim Bellarabi (August 2014).
- Bayern have seen out each of their 16 leads in the Bundesliga this term (league high).
- Hoffenheim have recorded the fewest wins this term (two) and surrendered the most points from winning positions (17) in the top flight.
- Bayern’s Robert Lewandowski has squandered almost as many chances this term (23) as the whole of the TSG team combined (25 - only three sides have wasted fewer).
- Thomas Muller and Lewandowski have both been involved in 18 goals this season, while Hoffenheim as a whole have netted just 18 goals in 2015/16 – a negative club record.